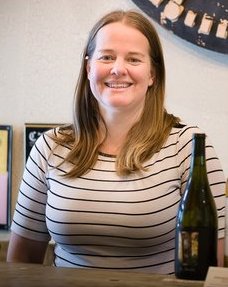 Brittany’s family history is deeply rooted in viticulture and enology. From her great grandfather Fredrick Doak, a vineyard owner in Napa Valley that sold his grapes to vintners during the early nineteen-hundreds pre-prohibition, to her parents Fred & Linda Rice, founders of Sunstone.

Brittany helped plant the first merlot vines on the family property in 1990, which is known today as block B in the Sunstone vineyard. At the age of sixteen, she began serving wine to visitors and guests in the family tasting room. When she was twenty one, she worked in the cellar alongside winemaker Daniel Gehrs, the family’s winemaking consultant from 1999-2006.

In 2005, while entrenched in crafting the family wines, Brittany embarked on a new passion project, which would focus on small lot, unfined and unfiltered organic Bordeaux blends.  Millesime Cellars was born and in that first year Brittany made only 100 cases.

In 2019, Brittany returned to Sunstone to take over winemaking from her brother, Bion, who led winemaking at Sunstone from 2011-2019.

Open Daily from 11am to 4pm
Monday through Thursday- Curbside Pickup Only
Friday through Sunday- Wine & Food Service and Pickup Available
We are closed the following days:
Easter, Independence Day, Thanksgiving, Christmas and New Year's.

OUR TASTING ROOM RE-OPENS ON MAY 29TH! PLEASE READ THIS IMPORTANT MESSAGE BEFORE VISITING. Get More Info