Sunstone has been committed to growing wine grapes without the use of herbicides, pesticides, or synthetic fungicides since the initial planting in 1990. Sunstone’s estate-grown wines are the product of a vineyard in harmony with the Earth’s cycles throughout the year. “Not only do organic vineyards and toxin-free soils more accurately reflect the Santa Ynez Valley terroir, but they also respect our consumers’ health and the health of the people that work here,” explains Vice President & General Manager, Dave Moser.

The fundamental philosophy for producing high-quality wines at Sunstone is to preserve the inherent quality of the grapes at every step in the grape growing and winemaking process. This holistic approach also creates a healthy environment in which to work and live.

“There was once a time when pesticides were thought to be the universal remedy to agriculture. The concept of disrupting eco-balance was non-existent, and the belief that ‘the only good bug was a dead bug’ permeated society,” Director of Winemaking, Brittany Rice, explains. “We are constantly experimenting with different methods to achieve a natural balance in the vineyard, which can be severely disrupted by the ‘quick-fix’ employment of herbicides or pesticides. We use cover crops, like barley, which not only generate competition with the vines, but also host beneficial insects. This type of equilibrium is an ongoing process that we are constantly fine tuning each day.”

Brittany claims “It is really wonderful to work with fruit that has no residual pesticides. I feel that the vines tend to be healthier, and organic farming is certainly the way of the future, as we will have to use a more sustainable approach to agriculture as a way of caring for the world that we live in.”

Santa Barbara County
Santa Barbara County is home to some of the most distinctive viticultural growing conditions in the world, with three individually identified viticultural areas: Santa Ynez Valley, Sta. Rita Hills and Santa Maria Valley. While most mountain chains in North and South America run north/south, Santa Barbara County has two ranges running east/west – the most clearly delineated east/west transverse ranges between Alaska and Tierra del Fuego on the Pacific Coast of the Americas. The mountains come together in a V-shaped orientation and, coupled with their proximity to the Pacific Ocean, channel fog and cool ocean breezes through the Sta. Rita Hills into the Santa Ynez Valley, creating a unique climate for wine growing.

Santa Ynez Valley
In 1983 the Bureau of Alcohol, Tobacco and Firearms (BATF) recognized the Santa Ynez Valley as a unique viticultural area. More than 4,000 acres of vineyards are planted in this region at elevations ranging from 200 feet near the Santa Ynez River to 1,500 feet in the foothills of the San Rafael Mountains.
The soils vary from gravelly loams and clay loams to shaly and silty clay loams. All soils have excellent drainage. The climate of the Santa Ynez Valley is extremely diverse, yielding many different mesoclimates. The Santa Ynez Valley varies from a Low Region I at the west end (Highway 101) to a warm Region II further east (Lake Cachuma) on the UC Davis climate degree day scale. As one moves due east into the valley from Buellton, the average temperature usually increases about one degree for each mile travelled.
The Santa Ynez Valley AVA—and in particular the middle and eastern portions of the AVA—is well-known for the production of high quality Rhone and Bordeaux varietal wine grapes, which require relatively high temperatures (degree days) to ripen fully.

Climate
Sunstone’s estate vineyards are situated in a moderate to warm Region II mesoclimate, in an area of the Santa Ynez Valley that typically sees a 30 to 40 degree Fahrenheit diurnal temperature fluctuation during the summer. As a result of the mild winters here, the growing season typically starts earlier than most and we harvest later due to cool, breezy evenings and foggy mornings. Because of this, we experience an extended ripening period, causing our grapes to develop an uncommon intensity of flavor and aroma.

Geology
The Santa Ynez Valley has been under the ocean several times in the past 150,000 years. Sunstone’s vineyards are deeply rooted in a subsoil of near-vertical Monterey shale, the result of these thousands of years of marine deposits and geological uplift. Closer to the surface, the Santa Ynez River has exposed and imported many younger soil types, such as sand, gravel, and loam, which are somewhat nutrient deficient and excellent for drainage. 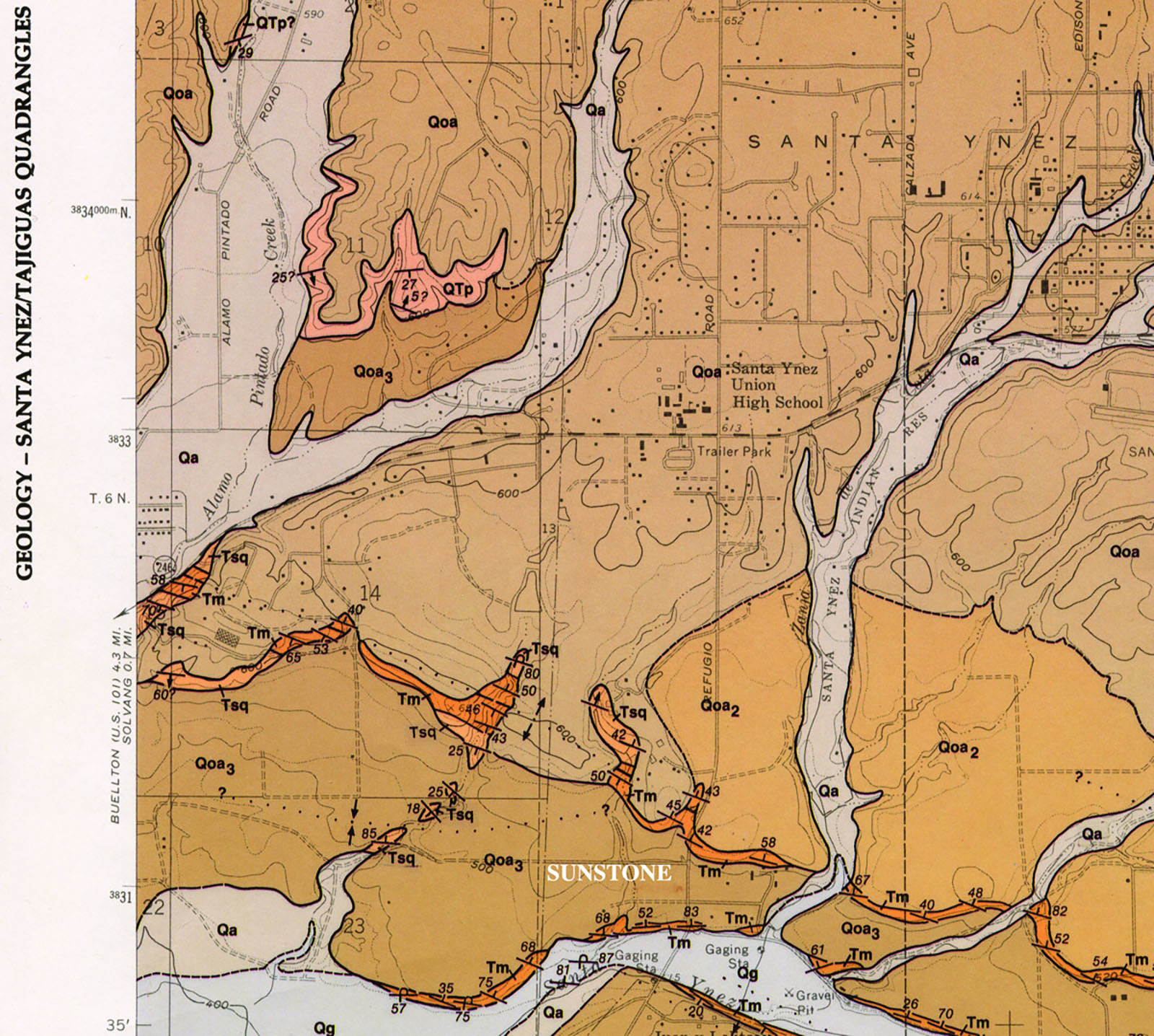 Sunstone’s Estate Vineyards run parallel with and step down to the Santa Ynez River and offer two principal soil types. According to the 1988 survey, conducted by Thomas Dibblee, Jr., the Sunstone Estate is planted on three terraces, each on a foundation of Monterey shale of early to late Miocene age. The upper terrace of “white-weathering, thin-bedded, hard platy to brittle siliceous shale” is from the Mohnian Microfaunal Stage. Beneath that, and on Sunstone’s lower terraces, is “white-weathering, soft, fissle to punky, semi-siliceous, phosphatic and calcareous shale with many thin carbonate strata from the Luisiana and Relizian Microfaunal Stages.

Open Daily from 11am to 5pm
Last Pour at 4:30pm
We are closed the following days:
Easter, Independence Day, Thanksgiving, Christmas and New Year's.