When the Rice Family moved in 1989 from Santa Barbara to a peaceful 52-acre Santa Ynez ranch to grow wine grapes, little did they know that they would be stewards to one of the first organic vineyard estates in Santa Barbara County. Fred and Linda, along with son Bion, and daughters Ashley and Brittany, originally chose the terraced site overlooking the Santa Ynez River for its ideal south-sloping exposure, its sandy, rocky soil, and a micro-climate that features early morning fog, warm, breezy afternoons, and cool evenings. It proved to be a fortuitous choice, as they soon discovered that it was a perfect spot for the growing of top-notch organic grapes and enjoying a wine country lifestyle. 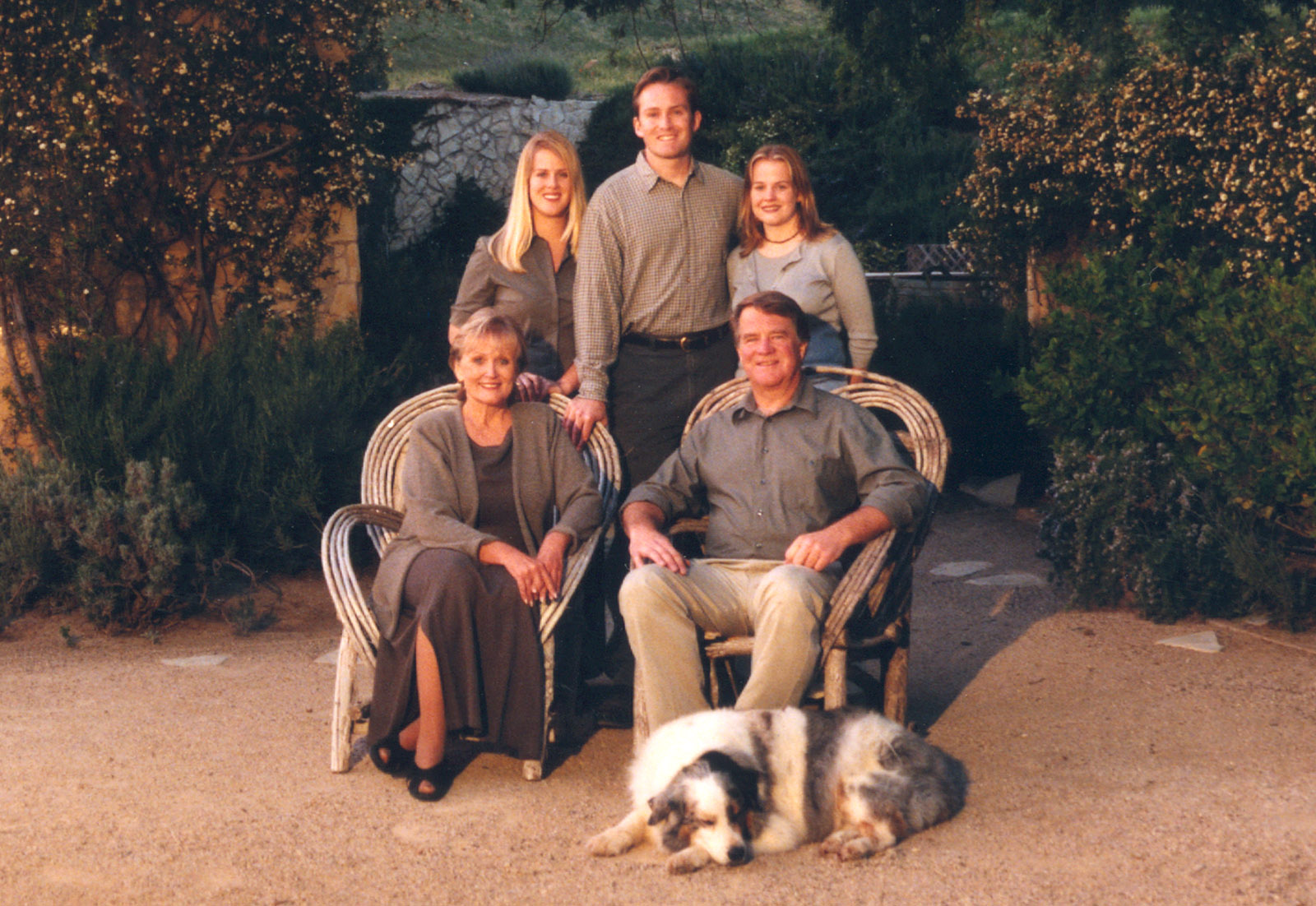 “Our goal was to create a place where wine and food could be enjoyed in a picturesque atmosphere,” said Linda Rice. “There is a sincere camaraderie and a sense of sharing is so much a part of this lifestyle. All of our interests, from environmental preservation and organic growing, to the celebration of food, family, and friends came together here at Sunstone.”

A true visionary, Linda Rice, sadly passed away in 2010, leaving a wonderful legacy to her children and winery visitors from around the world to experience for generations to come. The vineyard, winery and villa are now a monument to Fred and Linda’s passions and dedication to family, friends and the environment.  Read “A Vintage Journey” to learn more about the early stages and development of Sunstone in Linda’s words.

Today, two Rice family members are still involved in running the business- Fred as Sunstone’s President and Brittany as the Director of Winemaking, ensuring the continuation of the original vision and commitment to organic grape growing and sustainable business practices. “When our family planted the Sunstone vineyard in 1990, we knew that good wine started with caring for the land,” says Fred. “Over two decades later, we continue to nurture our organic vines to make delicious, world-class wines.” 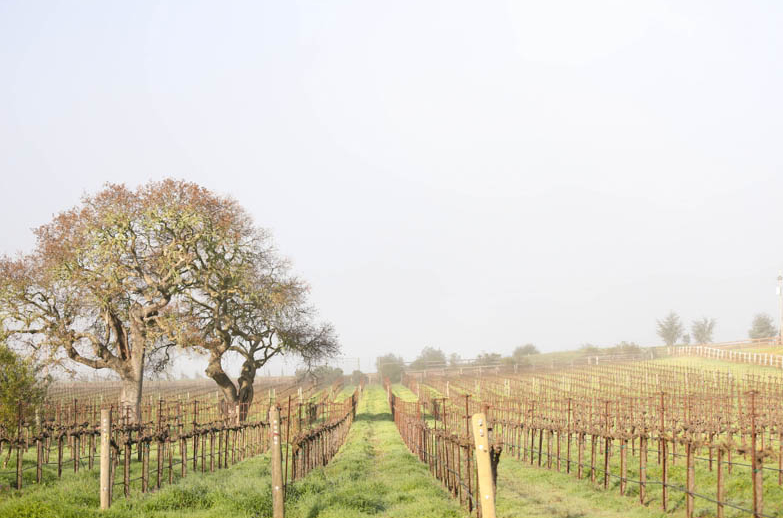 Sunstone’s 28-acre vineyard was planted in 1990 by the Rice Family to Merlot, Cabernet Franc, Cabernet Sauvignon, Syrah, Mourvedre and Viognier,  and is completely farmed in an organic, bio-sustainable manner, meeting the highest organic farming standards in viticulture. It is believed that Sunstone is now the oldest, continuously organically grown vineyard in Santa Barbara County.

Sunstone, a boutique winery named after the vineyard estate’s exposed sun-dappled shale and stones, is the premiere destination winery on the central coast. Located just 30-minutes north of Santa Barbara most visitors would agree, Sunstone is the most beautiful vineyard and winery tasting room on California’s Central Coast. And because locals know best, Sunstone has been honored many times over by the Santa Barbara Independent reader poll as “Santa Barbara’s Favorite Red Wine” and “Best Santa Ynez Valley Tasting Room”. 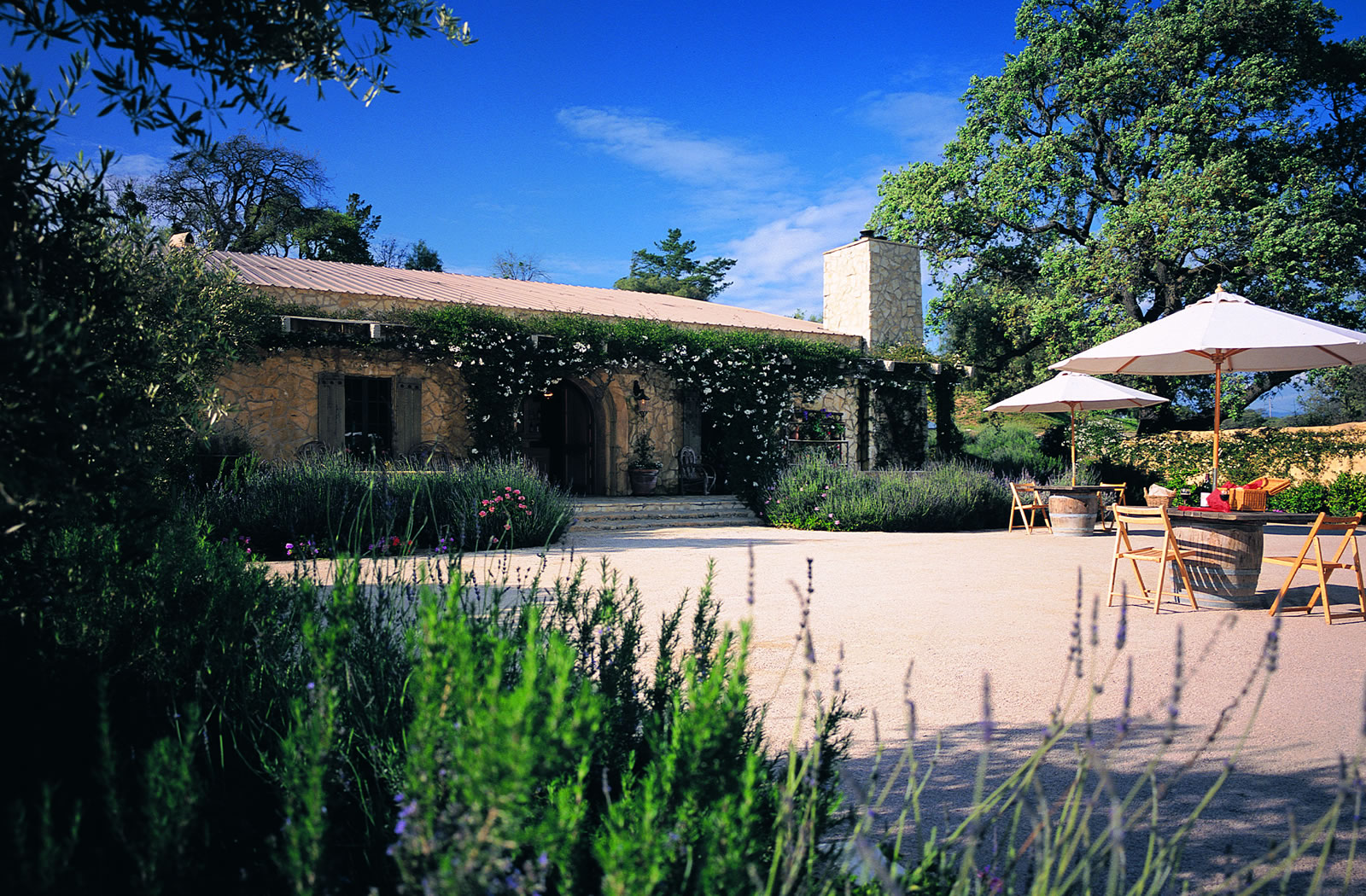 The site of the winery tasting room was originally a horse barn, which was seriously damaged when an oak tree fell on it after heavy rains and winds. Thanks to that storm, and the visionary, collaborative design and building skills of Fred and Linda Rice, Sunstone was built and opened in 1994. A gorgeous destination winery, Sunstone is considered by many to be one of the most attractive tasting rooms in the Santa Ynez Valley.

Aromas of French lavender and rosemary greet visitors as they approach the winery’s inviting courtyards, expansive picnic grounds and tasting room, … a beautiful place to experience beautiful wines. The winery architecture recalls rustic homes and barns in the Provencal countryside, and the relaxed ambiance in the tasting room includes a kitchen complete with wood-burning oven, and 5,000 square feet of stone barrel-aging caves built into the hillside. Winemaker dinners and other special events are held in the tasting room, caves, and courtyard year-round.

Family owner and winemaker, Brittany Rice, recommends experiencing Sunstone wines at the picnic grounds or in the caves. “Tasting our wines is tasting the terroir of this special place,” she says. “When you arrive, you are surrounded by the soils and the vines that create our wines. You can feel the temperate winds that sweep between the rows, creating the perfect climate for Bordeaux and Rhone varietal grapes. Our goal is to capture the true essence of this special vineyard in your glass.” 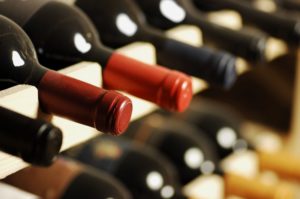 As Director of Winemaking, Brittany Rice, is dedicated to producing world-class Bordeaux and Rhone style wines, utilizing organically grown wine grapes from the estate vineyards, and grapes from other sustainable and organic vineyards. Sunstone is renowned for its Rhone varietals, including their Viognier and unique Syrah, both of which have been rated 90+ Points by Wine Enthusiast.

THE VILLA AT SUNSTONE

When Linda and Fred began to build The Villa on the hillside above Sunstone Winery in 1999, they intended it to be an extension of the principles upon which they’d built their life together. Originally conceived as a private home, the 8,500 square foot Villa now serves as an extension of the Sunstone Winery lifestyle by providing a culinary center to entertain guests.

On a trip to France, Fred and Linda discovered reclamation yards containing architectural remains of buildings in towns and humble villages in various regions of France, including Marseille and Provence, from which the artifacts were incorporated into the Villa. Forty-five 40,000-pound containers arrived on the Santa Ynez hilltop just off Refugio Road from 2001-2003. 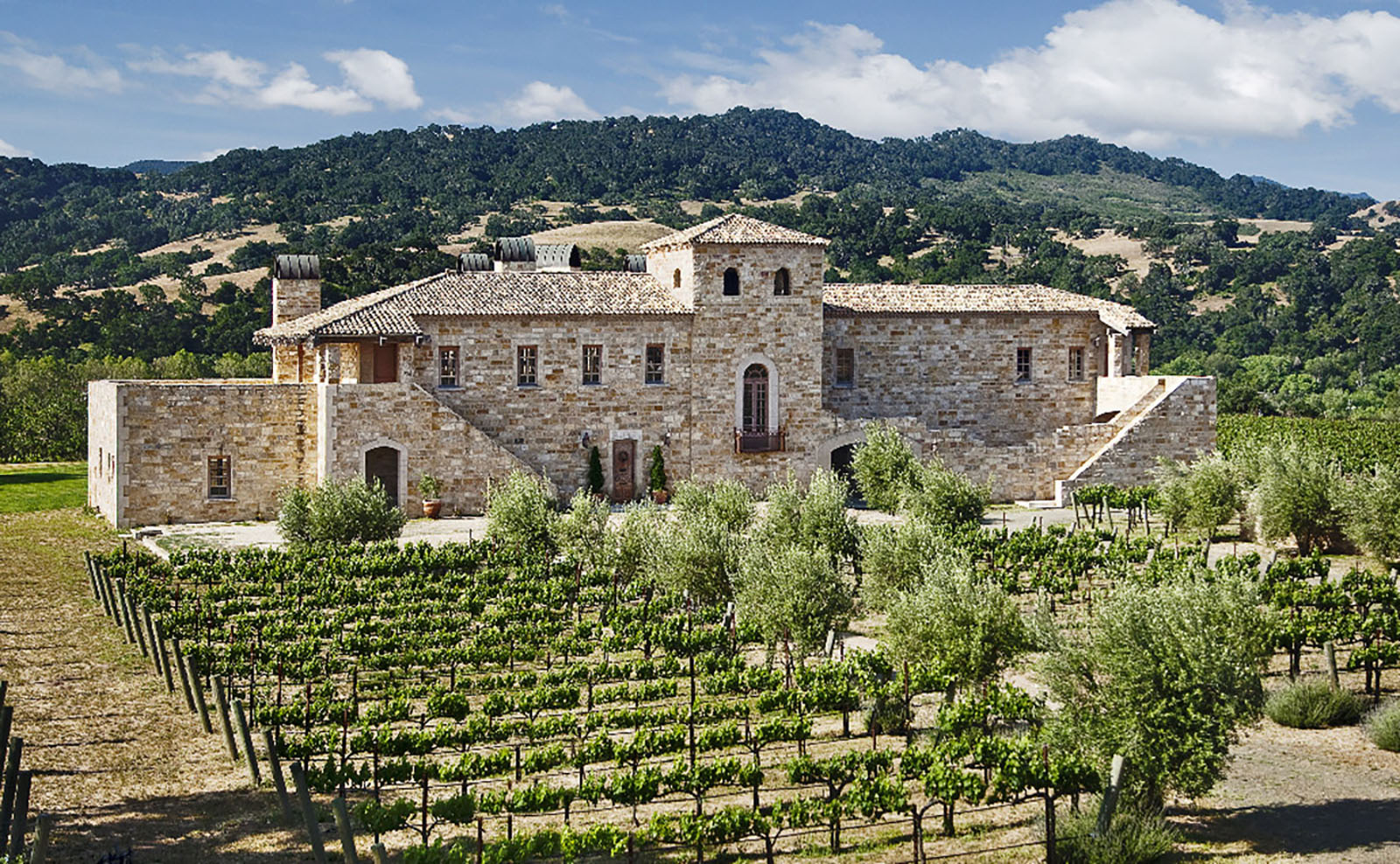 Reclaimed materials, such as French limestone, hand-formed roof tiles, a fireplace from the Bordeaux region of France, enormous hand-hewn pine beams from Queen Victoria’s lavender factory, a prison cell door from Normandy constructed during Napoleon’s reign, and a thousand-year old limestone kitchen sink were all incorporated into their dream building. Walking through the Villa is an opportunity to see and touch pieces of history.

The Villa has five suites, each with private entrances and a view of the Santa Ynez mountains and Sunstone vineyards. A bit of moss is beginning to grow on the stone at the foot of the front door. Nature is putting its own mark on the Villa, as was intended.  Fred and Linda Rice designed and built a house from which to watch the four seasons that will become even more beautiful with age, a living piece of history.

The Villa at Sunstone now serves as an extension of the Sunstone Winery lifestyle by providing a culinary center to entertain guests for intimate gatherings, small weddings, winemaker dinners and private culinary retreats. 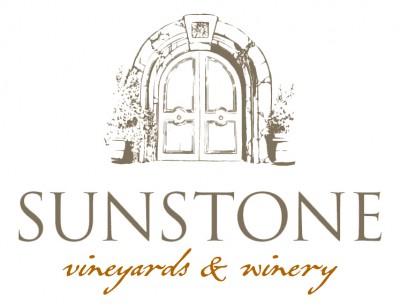 Many people ask how we came up with the name “Sunstone”, and what it means. It was inspired by the sun-dappled stones that came from the Santa Ynez Mountains and were eventually deposited here by the Santa Ynez River over the millennia. We used these stones and the Sun exposed shale to accent the winery building and caves. 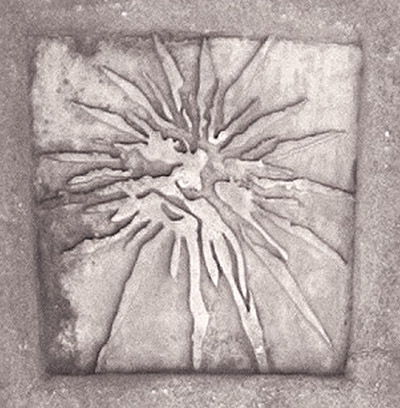 We soon discovered the name was cosmically meaningful when we were reminded of the famous “Sun Stone Calendar of the Five Eras”, a 24-ton sculpture carved by the ancient Aztecs. There is also a type of mineral called “Iceland spar”, which is considered to be a medieval sunstone used to locate the sun in a completely overcast sky. A theory exists that the sunstone had polarizing attributes and was used as a navigation instrument by seafarers in the Viking Age.

Our meaning for “Sunstone” fatefully manifested into the winery’s iconic keystone, positioned over the front entrance door to our tasting room, intended to symbolize and respect the symbiotic relationship between Life and the Sun. Our 25+ year old vines capture the Sun’s light energy, creating complex sugars in the grapes that yeasts naturally convert into wine. 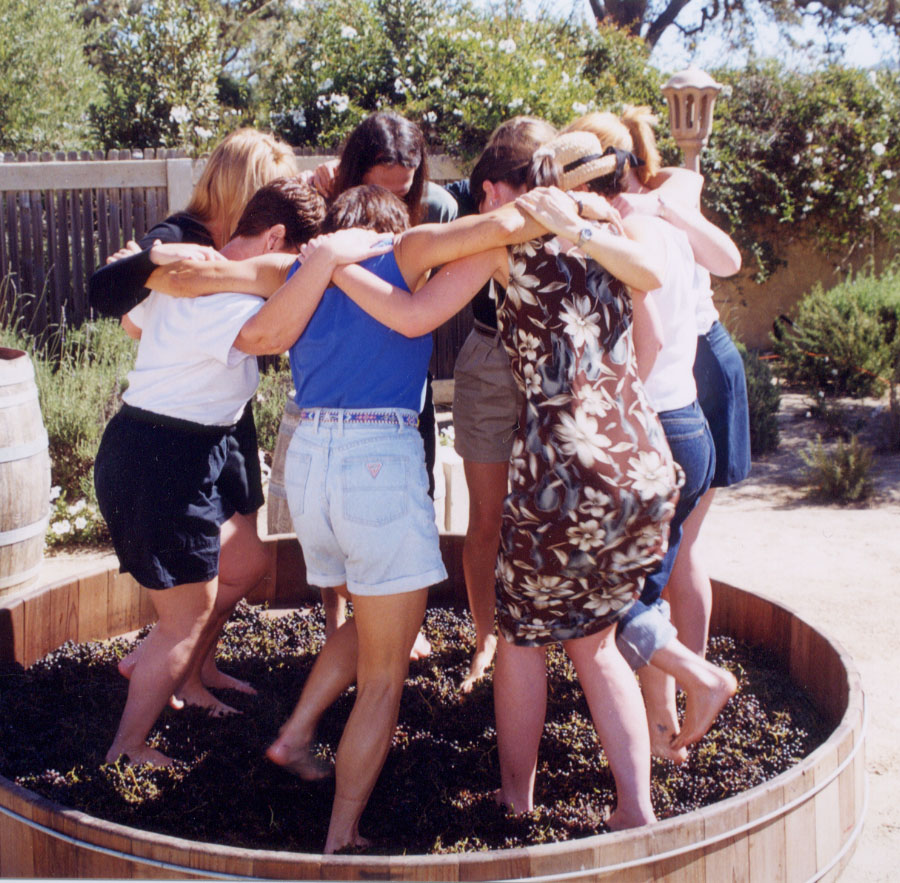 Based on the Rice family’s values, Sunstone is an environmentally responsible company dedicated to organic grape growing, worker health, recycling and reusing whenever possible. We are completely dedicated to excellence in grape-growing, winemaking, hospitality and a highly-ethical responsibility to the people we hire and serve. The relationships we foster with our customers, employees, farmers, purveyors, contractors and community members is paramount. Everything we do contributes to these relationships.

Open Daily from 11am to 5pm
Last Pour at 4:30pm
We are closed the following days:
Easter, Independence Day, Thanksgiving, Christmas and New Year's.